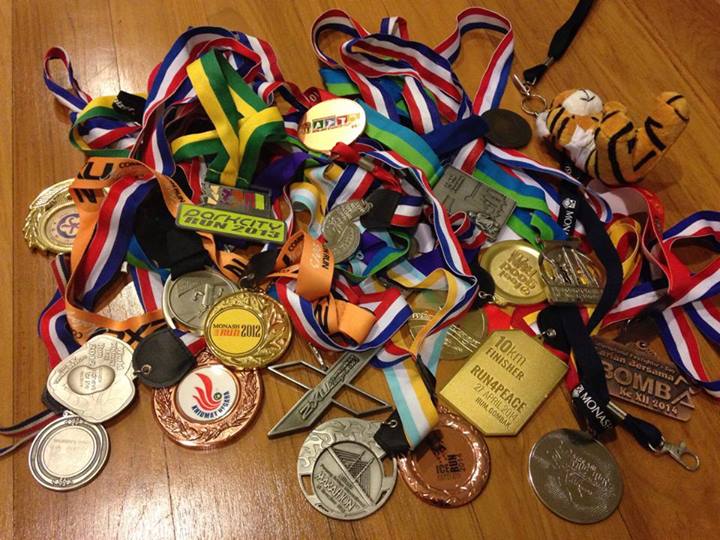 Runners are a special bunch. They constantly push themselves past their comfort zone just to feel the breeze in their faces as they cover more ground. Those who join races are even more special. If you’ve frequented enough races, you’ll probably have come in close contact with one of the following runners:

How to spot them: The next time you join a run, check out the event page on Facebook or their official website. Look under the comments section – you will surely spot a Finisher Medal Runner asking if there are finisher medals, and whether or not the medals are limited.

How to spot them: They’re usually in line at the goodie bag queue. Sometimes, the Goodie Bag / Race Tee Runner won’t even complete the run, they’re just there to collect their goodie bags.

Personality traits: The Fashion Runner cares a lot about their image. They may possibly spend more time and effort researching the latest running fashions instead of training for the race.

How to spot them: They’re usually decked out in the latest running gear and fashion from head to toe, and look like they just stepped out of the Runner’s World magazine.

Personality traits: As the name implies, walkers usually walk. However, there are sub-categories of Walkers:

The Sprint-Walkers: These runners sprint away at the sound of the starting gun before getting winded and then slowing to a walk. Later on, they pick up the pace again and alternate between walking and jogging.

The Perpetual Walkers: They literally walk from start to finish. They believe that it doesn’t matter how long you take, it’s whether or not you finish! Walking is good, walking is better than sitting at home watching TV. But if you plan to walk, be mindful of other runners.

How to spot them: Many of them can be spotted by their distinctive habit of having their hand on their GPS watch at the start and finish line!

How to spot them: Official pacers are usually running with a balloon, or a distinctive top. The pressure that comes from being a pacer is immense – a whole bunch of people are depending on you to help them achieve their goal. They deserve a pat on the back or a friendly “thank you” after the race, so look out for them!

Personality traits: The only real reason they’re running is because their other half is running and made them join as well. Or they might have joined because it was something they could do together.

How to spot them: There are two types of Bf/Gf runners. (i) They will run side-by-side from start to finish!, (ii) one of them will wait at the finish line for the other half with a drink. Awwwwwwwwwww.

How to spot them: You know this girl or guy. They either arrive an hour before the crowd to sit at the starting line, or arrive later but then slither their way through the other runners in the starting pen to get to the front of the pack. The latter are oblivious to the fact that their actions are frowned upon. The last thing runners want is to have someone sweaty pushing and bumping against them in the already hot and stuffy starting pen. So please start from the back if you’re late!

Personality traits: Unrestrained need to photograph oneself all the time.

How to spot them: They wouldn’t settle for taking selfies at the starting line, they will also be taking them DURING the run! They sometimes enjoy stopping in the middle of the crowd to snap a picture, sometimes causing accidents and run-ins with other runners.

Personality traits: They never show up on race day, for whatever reason.

How to spot them: Unless you know them personally, the No-Show Runner is extremely hard to spot. That’s because they’re never around!

I don’t want to admit it, but I am guilty of being one or more of the “types” of runners I’ve listed here! But I feel one of the most important things in life is being able to laugh at ourselves (YES, even though we may be a VERY SERIOUS Runner).

Disclaimer: This list is obviously non-exhaustive and you might meet a runner which is a combination of a few, or none of the above, but enjoy anyway!

Are there any other types of runners out there that we’ve missed out on? Share with us in the comments below or on our Facebook page!

Written by: Adele Wong. You can find her at her running blog. This post has been adapted from original article at her blog. Adele discovered running five years ago and has been obsessively hitting the tracks ever since. She is one of the pacers for the Puma Running Club and also part of the Cari Runners Group.